keep up to date with all the news​ 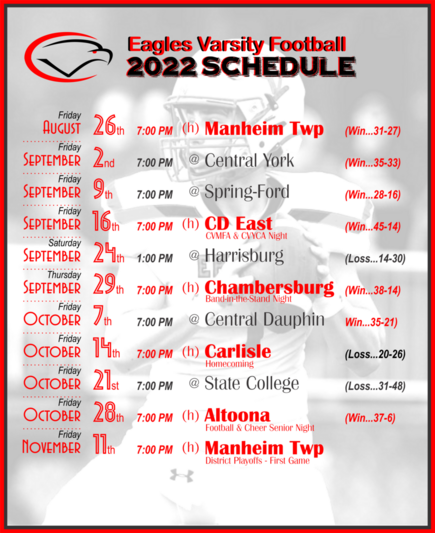 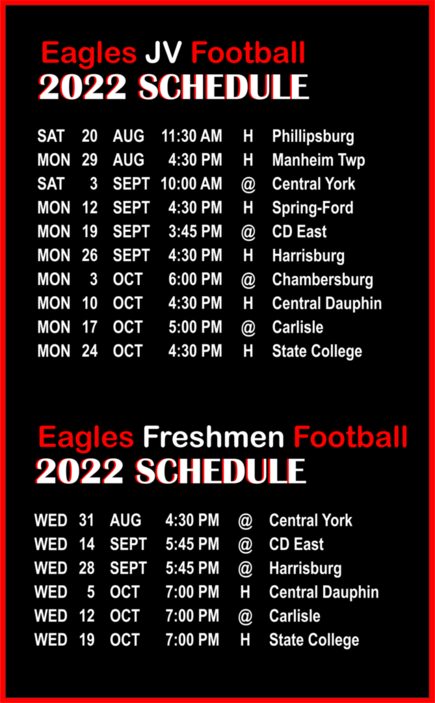 For 24 years from 1989 through 2012 Tim Rimpfel was the head football coach for the Cumberland Valley Eagles.  His career was characterized by the number of games and championships his teams won and his highly successful Wing-T offensive formation. ​

Eagles Football on the Radio!

provide the play-by-play and will be joined by Joe Ricci in the booth.

Broadcasts will also be streamed on www.1029whyl.com

Under Rimpfel's direction the Eagles made 19 post season appearances, won nine District 3 championships and captured the 1992 PIAA state title, a 28-14 win over Upper St. Clair. He went 307-100-3 in his career and is one of only 11 coaches in Pennsylvania to eclipse the 300-win mark.

Tim received many personal awards and recognitions.  He was selected Mid-Penn and PA coach of the year; was chosen head coach of the 2011 PA Big 33 Football Team; and was inducted into the PSCFA, PA Sports West Shore Chapter, and the Cumberland Valley Football Hall of Fames.

More Important to Tim than the awards was the development of the young men he coached.  He not only emphasized commitment on the field, he championed a strong work ethic in both the classroom and the community.  Respect was big on Tim’s list and his players worked hard to earn it by paying attention and always doing the right thing.  You did not earn his respect by doing anything less.  Many of Tim’s players went on to play football in college and some (Ricky Watters and Jon Ritchie) even made it to the NFL.  And thanks to Tim's guidance and encouragement a number of CV alumni became football coaches themselves.

Tim leaves a legacy of not only building strong bodies but, through his dedication and sportsmanship, developed men of good character who have, and will become, community leaders. Tim Rimpfel was many things... A family man. A loving husband. A caring father. A mentor. A life-long friend. A legendary coach... Tim Rimpfel will be missed by all.